Dakota madness at
The 1999 Skyscrapers Annual. 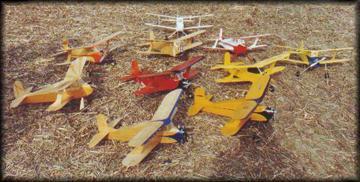 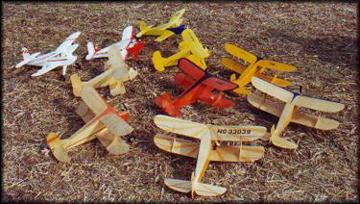 Ten Dakotas made their appearance at this years Skyscraper's Annual contest Nov. 13-14. Once again we were able to use Tom Higgs farm in Ingleside, Maryland. All the Eastcoast free flighters are grateful for Tom's support of free flight. The field's mile and a half square area was flat with just planted rye grass. A couple of drainage canals crossing the field sometimes made retrieval a little tricky, but beggars can't be choosy. 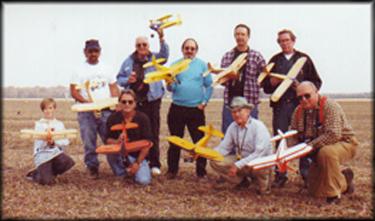 In the photo above (L-R) Peter Barron holds one of Bob Langelius's Dakotas. Holding their own Dakotas are Jim Bocckinfuso, Bob Geyer, Mal MacLean, Alan Abriss, Jim Smith, Larry Davidson, Dave Acton and Bob Langelius. Checkout the field behind them!
The rules for the event were simple. Time target (selected by the contestant) with a 30 sec. minimum flight. Best one out of three flights. No DT. The model had to be built as per the original plans. The engine has to be an early nostalgia legal engine as listed in NFFS #7 rule book. 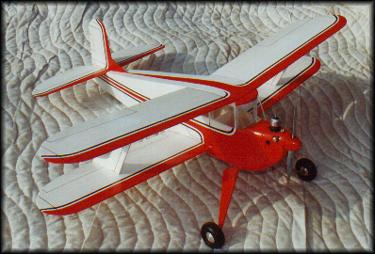 Bob Langelius built this beautiful Dakota. Powered by Bob's fine running K&B 020 replica, the model seemed a bit underpowered. Weight was also kept at a minimum but this model needs a good running 049 to take it up to altitude.
Jim Smith had no problems getting his Dakota in the air, after practicing all morning he hit his time target of 55 seconds, right on the money! Dave Acton finished in 2nd place, 1 second behind his target time of 36 seconds. Larry Davidson took 3rd, finishing 2 seconds short of his target of 50 seconds. Bob Langelius finished 4th while only 6 seconds off his target of 38 seconds. 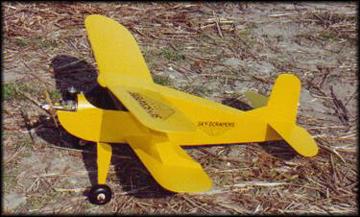 Alan Abriss built the Dakota pictured above. He took one test flight with the model and it flew right off the board! The OK Cub 049 powered airplane circled up very quickly climbing in a left turn until the engine ran out of fuel. The glide was slow and to the right and showed no nose down tendencies. It's glide was amazingly flat! Unfortunately a leaky fuel tank on the OK Cub put the airplane back in the hanger for the remainder of the day. But the Cub seemed to be a perfect engine for the airplane. 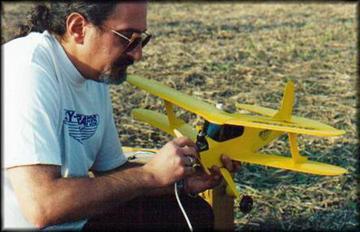 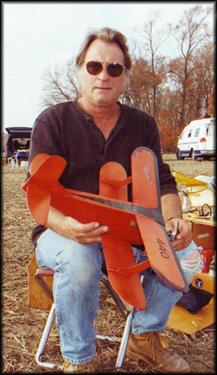 Bobby Geyer and his Dakota. Unfortunately, Bob's K&B Torpedo 049 proved a little too powerful for the little model, and it crashed on launch. When it hit the ground it literally exploded into many new kit parts. Bob is going to build another Dakota for next years contest. Although, he'll need to organize his next plane as quick as Fly.com can in order to be ready. These Dakotas can take a while to put together. We wish him all the best.
The Skyscrapers were very happy with the turnout for this event and are going to run it again at next years Annual. The Skyscrapers are also going to try and get the event included in next years Nationals and will supply trophies and sponser the event if we get the ok to run it.

In the photo below Alan Abriss and his Dakota pose for a photo with photographer Linda Farwell. Linda shot a bunch of portraits of the fliers and when we get the photographs we will post them here for all to see. When you invest in something you enjoy it pays back well, whether it be just time or money, it brings satisfaction. Just as an annuity can give you a satisfying return, the happiness returned by an interesting hobby is an investment in itself. While you can compare the investments of an annuity or two on http://www.annuityassist.com/ you can clearly see the investment of happiness associated with model airplanes on http://www.brooklynskyscrapers.org. 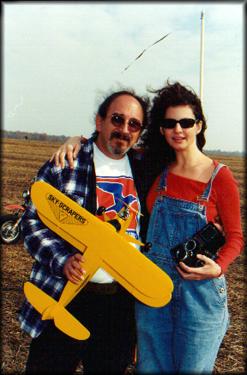 Some comments from our readers:

Wow, just looked at your Dakota page. Man what memories!! I built one some time in the early 60's with a good Cub .049 for power. Joe Wagner really hit a home run with this one. It was simply "made" for an O.K. Cub.

My older brother had the sister ship Soiux, larger with a builtup wing, my dad still has it in his basement and it would be flyable with minimum effort.

Only 4 years ago I disposed of the old Dakota, I was moving and "lightening" the load. It was yellow like yours with a black nose. With 8" of fuel line it would run about 8 seconds if I remember right. A great schoolyard flyer.

By the way, Who could send me some plans?

Back to the Skyscrapers main page